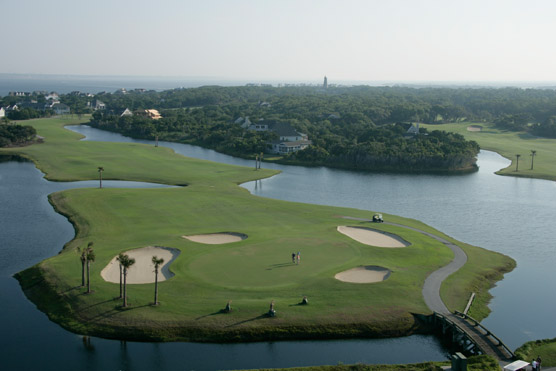 Born in 1914 in Savannah, Georgia, George Cobb grew up in golf, with a family that loved golf above all else. It is no wonder that this man would become one of the most famous golf architects in North America.


After getting a degree in landscaping in 1937 and serving his country in World War Two, he was contracted to design a golf course at Camp LeJeune, a military base, that would help with soldier rehabilitation. With some help from golf architect Fred Findlay, he was able to build a course that would be the first of many for him. This course would also become the template for his belief that golf was meant to heal, not punish, and to stimulate, not frustrate.


By the 1950s, George Cobb was working hard at building golf courses in the Southwest United States, with over 100 original designs and even more redesigns.


It has taken awhile, but George Cobb is finally getting the appreciation for his architecture genius and how he built golf courses that were a joy to play, and not a frustration to try and conquer. When he died in 1986, the building of his golf courses stopped, but the joy many felt playing them lives on to this day.


George Cobb has designed one of the most famous courses in the Myrtle Beach area. Called Bald Head Island Club, it is an exclusive and private facility that is unique for it only allows golf carts, and no cars in its grounds. The golf course is one of the best courses in the Southwest United States, and ranked as the twelfth best course in Myrtle Beach by Golf Digest, one of the best places to play in the United States by Golf Digest and one of the top 10 coastal golf courses by North Carolina Magazine.


It features 15 freshwater lagoons, a forest, dunes that overlook the Atlantic Ocean and some of the best holes in the Myrtle Beach area. George Cobb may have been gone for over 20 years, but his courses live on and his philosophy of golf being a game of healing, not frustration, has influenced golf course architects for generations, helping to create courses that are fun to play and not stressful. No other Myrtle Beach golf course can compare.