Named the 6th greatest golfer of all time by Golf Digest 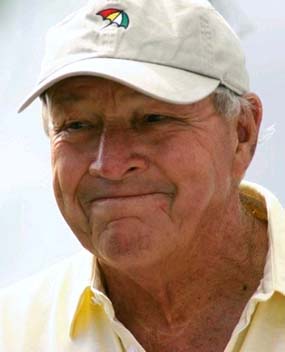 Born in 1929, Arnold Palmer is considered one of the big three of golf during the 1960s and 1970s with Jack Nicklaus and Gary Player. He is regarded as one of the greatest golfers of all time and has won numerous championships going all the way back to 1955. Nicknamed "The King" because of his dominance and his ability to make golf popular during the television age, he is widely credited with helping to popularize the sport around the world.


Apart from golf, Palmer is also very active in golf course design, which began when he negotiated to build the first golf course in China. After this, he created Palmer Course Design in 1972, which was renamed Arnold Palmer Design Company in 2006. There are three golf courses in Myrtle Beach that have Palmer's signature attached to them. The first is King's North, which is one of the top golf courses in the United States. Holes six, 14, 16 and 18 were featured in The 100 Greatest Holes Along the Grand Strand, the course was named South Carolina's 1997 Course of the Year and it was picked as one of America's Top 10 by Golf Digest. Over the course of 25 years, this course was the most requested and best recognized course in Myrtle Beach. This course is short but it requires a great deal of accuracy to conquer. With 7,000 azaleas, 600 trees, huge lakes, Bentgrass Greens and tricky bunkers, this is one of the most visually exciting and challenging golf courses in the United States.


Myrtle Beach National South Creek stretches 6,400 yards but it is not less difficult than a longer course, in fact it is an Arnold Palmer gem that tests the best of golfers as it winds through the coastal wetlands and hardwood forests of the area. The West Course at Myrtle Beach National is one of the most challenging courses in South Carolina thanks to its many doglegs, bunkers on the fairway and natural hazards that Palmer integrated into the course. This course is a delight to play but not for the faint of heart by any means.