One of the most well-known in Myrtle Beach golf 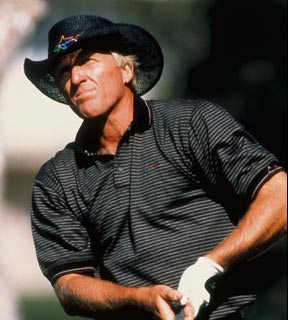 Born in 1955, Greg Norman, nicknamed The Shark, is known worldwide as one of the greatest golfers of the second half of the 20th century. His achievements are legendary, including ranking as the number one golfer in the world for an astonishing 331 weeks from the 1980s to the 1990s.


Over the course of his career, he has earned over $1 million five times on the PGA Tour, won three Arnold Palmer Awards in 1986, 1989 and 1995 for being the lead money winner on the tour and has had 30 top 10 finishes in the Majors.


Norman has become well-known for almost winning major championships several times on the PGA Tour, including the Masters, the U.S. Open and the PGA Championship. That is not to say he has not achieved success. He won the PGA Tour of Australia six times, the European Tour's Order of Merit once in 1982, and the Vardon Trophy for the lowest scoring average on the PGA Tour three times. For his achievements, he was inducted into the World Golf Hall of Fame in 2001.


Norman has also designed several courses across the United States. In 1987, he created the Greg Norman Golf Course Design company, which has completed 70 golf courses on six different continents. For his work in golf course design, he was awarded the Old Tom Morris Award.


Greg Norman has even left his mark in Myrtle Beach, where he designed the Greg Norman Course at Barefoot Resort, which makes up seven holds along the Intracoastal Waterway. With natural beauty surrounding the course, it has been designed to challenge every golfer from beginner to professional, while creating a playing environment that is enjoyable for all. Using natural vegetation and the natural contours of the land is something that Greg Norman's courses share in their design. This is one of the reasons why Greg Norman's courses are considered to be some of the best that you can play, and the Greg Norman Course at Barefoot Resort is a perfect example of that - an excellent example of why Myrtle Beach golf is the best there is.