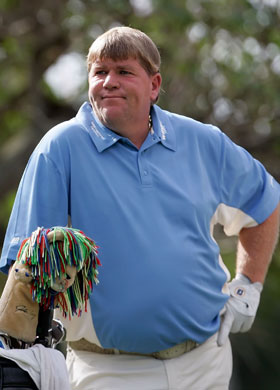 Born in 1966, John Daly is one of the most talented, and controversial, golfers of the past 20 years. Known for going from 'zero to her' when he won the 1991 PGA Championship, he has carved a career for himself based on his non-country club appearance and attitude, talent and long driving distance off the tee. All of this has contributed to making him one of the most popular figures on the PGA tour.


After turning professional in 1987, Daly won the Ben Hogan Utah Classic in 1990. He joined the PGA Tour in 1991 and surprised everyone by winning the PGA Championship that same year. He was the first rookie to win a major title since Jerry Pate won the U.S. Open in 1976. Daly would go on to have four more PGA wins; the 1992 B.C. Open, the 1994 Bellsouth Classic and the 2004 Buick Invitational. The other win came in 1995 when he again surprised everyone by winning the British Open. That gave him two major championships during his career.


With natural talent that has helped him find success on the golf course,John Daly has proven himself to be one of the best golfers of the 1990's. Since then, he has carved a name for himself outside of golf in various areas including golf architecture. With Wicked Stick, it is clear that the same talent that helped him with the British Open and PGA Championship also helps him create excellent and fun golf courses to challenge golfers in Myrtle Beach.

Few golf courses can achieve the legendary status as this one has. A true masterpiece of golf, it is so good that no visit to Myrtle Beach would be complete without at least taking in this golf course once. Ken Tomlinson may not be well-known beyond golf, but with courses like Tidewater, it is no surprise why he is well respected by his peers. When you create masterpieces like Tidewater, it is hard not to take notice of the talent behind the course. Ask us about adding Tidewater to one of our Myrtle Beach golf packages.