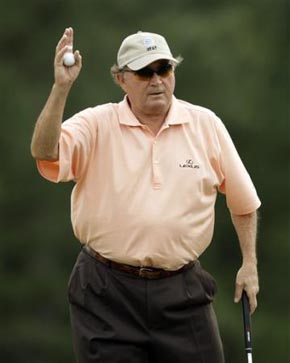 Some of the greatest golf course designers come from golfers who have spent their lives excelling at the game they love. Who better to design golf courses than someone who has made playing the game their entire life? This is the case with Ray Floyd, who is a member of the World Golf Hall of Fame and has a long list of accomplishments.


Born in 1942, he was the fourth youngest player to win on the PGA Tour, the oldest to win the U.S. Open, the only one to win the PGA Tour and the Senior PGA Tour in the same year, and was the member of eight Ryder Cup teams. In all, he has won 60 tournaments in his career. His wins include the 1969 and 1982 PGA Championships, the 1976 Masters and the 1986 U.S. Open.

His skill has been apparent throughout his career, which almost allowed him to win a major championship in four different decades. If he had of won the Masters in 1990, instead of losing in a playoff to Nick Faldo, he would have achieved this noteworthy record. At the ripe old age of 50, Floyd was still going strong, ranking 14th in the World Golf Rankings for 1992. His highest placement came in 1982 when he ranked second behind only Tom Watson.

Thanks to his contribution to golf, he was awarded the Gold Tee Award, one of the most prestigious awards in all of golf. Ray Floyd took that same skill on the golf course to begin excelling off the golf course, with golf design. Over the course of his golf design career, Ray Floyd has designed more than a dozen golf courses, including restoring Doral's Blue Monster, a legendary fixture of the Doral Open.

In Myrtle Beach, Floyd designed the beautiful Arrowhead Country Club (part of our Myrtle Beach golf package, the Supreme Package) with well-known golf course architect Tom Jackson. This 27-hole golf complex has a mix of Bermuda fairway grass and Bent Grass greens to create a masterpiece along the Intracoastal Waterway. With three different nine hole courses, called the Waterway, the Cypress and the Lakes, each is unique in its own way. A legendary golfer and respected golf course architect, Raymond Floyd is a man for the ages in the world of golf.