The one, the only, The Golden Bear 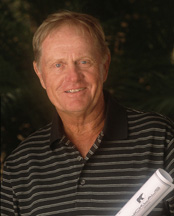 Simply put, Jack Nicklaus, or The Golden Bear, is probably the greatest golfer who has ever lived. No other golfer apart from Tiger Woods has had as big an impact on the game as The Golden Bear himself. Born in 1940, he revolutionized the game and made it popular for generations of fans. He has the distinction of winning more major championship victories than any other golfer. After winning the 1962 U.S. Open, he would win the Masters in 1965 and 1966 becoming the first golfer to win The Masters two years in a row.


He also won the Open Championship that year as well and again in 1970. Between 1971 and 1986, he would win several more championships, before finishing with his 18th and last major championship win at in The Masters in 1986. In all, he had 73 PGA Tour wins, second only to Sam Snead. He won the PGA Tour Rookie of the Year award in 1962, has won the Bob Jones and Payne Steward Award, was inducted into the World and Canadian Golf Halls of Fame and he is the only living person to have their face on a five pound bank note from the Royal Bank of Scotland. There is also a Jack Nicklaus Museum in his hometown of Columbus, Ohio. All in all, Nicklaus offers two great courses for a Myrtle Beach golf package.


Apart from playing golf, Nicklaus also owns one of the largest golf course design companies in the world. Beginning in 1969, Nicklaus has designed 299 courses in 40 years. Myrtle Beach has the honor of two golf courses designed by The Golden Bear; The Long Bay Club and the Pawley's Plantation golf course.


The Long Bay Club is one of the most challenging golf courses on the Grand Strand. With a 137 slope drop from the back tees, tough greens and deadly par threes, it is a course that is not for the faint of heart. Those who can conquer the course will feel as if they are Jack Nicklaus himself. Beginning golfers can test this course, but it may eat them up and spit them out by the time they are done. That challenge is what keeps golfers coming back, so they can conquer the legendary course themselves.


Pawley's Plantation provides wonderful scenery of marshes and lakes, as well as Bent Grass greens and split fairways, as well as a unique double green. A tough course to say the least, it was ranked by Golf Digest as one of the top courses to play in all of South Carolina. A legend on the golf course and a legend off of it. There is no one else like Jack Nicklaus, golf's grand old man.