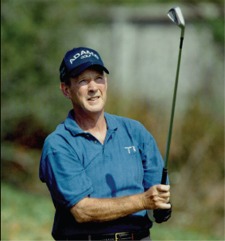 Born in 1947, Larry Nelson has found a great deal of success on the PGA Tour and is one of the top golfers of the past 50 years according to golf experts. Growing up near Atlanta, Nelson didn't start playing golf until the age of 21 when he returned from serving in Vietnam. After carefully studding the classic golf book The Five Fundamentals of Golf by Ben Hogan, he was able to learn how to play the game and was able to break 100 and 70 within nine months of starting to play.


Within six years of taking up golf, at the age of 27, Hogan qualified for the PGA Tour, and in 1979 he won two times on the tour and finished second to Tom Watson on the money list. Overall, Nelson would go on to win ten times on the PGA Tour, including three major championships. His first major title was in 1981 when he won the PGA Championship. Two years later he won the U.S. Open and in 1987 he won the PGA Championship again. Nelson played on the U.S. Ryder Cup team three times in 1979, 1981 and 1987 and has had a successful Champions Tour career since passing 50 in 1997. In 2006, he was inducted into the World Golf Hall of Fame.

Nelson has also been very active in golf course design, including building the Wild Wing in Myrtle Beach, which is a signature course that is known for each hole being memorable for its playability and aesthetics.The course makes up 1,050 acres and carries a natural beauty that is hard to believe. A beautiful feeling of serenity seems to fall over golfers who play this course thanks to its trees, waterways and wildlife. There are few golf courses that seem to become as much a part of the scenery than away from it. Wild Wing is such a golf course and exactly what you would expect from a natural talent like Larry Nelson.


By taking the same drive and determination to be the best that he had during his playing career, Nelson has been able to make an excellent golf course in Myrtle Beach that almost seems like a stroll through the park, than a golf game for some.