Believes every course should sit softly upon the land 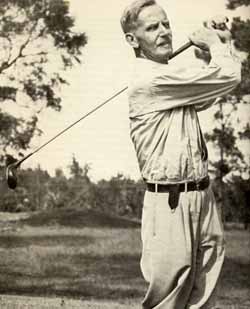 Other than Robert Trent Jones, there is no man that can compare with the impact on early golf architecture like Robert White. After being a school teacher in St. Andrews, the home of golf in Scotland, White ventured out to the United States in 1894 where he began to instruct golfers at the Myopia Country Club. Almost immediately, White began to find he loved the game of golf and loved teaching it, and that then manifested into a love of laying out golf courses almost as soon as he arrived in the United States.He would charge $25 to lay out nine holes.


He would walk a property, assign nine tee and nine green locations, and pick a few spots for bunkers and that was all there was too it at this early stage. In 1902, he formed a society of golf professionals in Illinois, the second association of its kind in the entire world. This made White the founder of the PGA, the largest golf association in the world today.


In those early years, White continued to learn and adapt his knowledge of grass and turf management so that he could begin creating better and greater golf courses. By 1916, he was well on his way to creating golf courses for a living and even served as the President of the PGA, which he founded and was the first president of, in 1920. As the years went on, Robert became known as a respected architect of golf courses and helped to design 30 golf courses around the United States. He would eventually move to Myrtle Beach and own several golf enterprises there.


Myrtle Beach has the honor of a Robert White golf course in Pine Lakes Country Club. Often called the Grand Daddy of them All, this was essentially the first golf resort in Myrtle Beach, opening in 1927. Pine Lake is part of our Grand Daddy package and part of other Myrtle Beach golf packages.


Designed as a 27-hole golf course, is also called the Home of Sports Illustrated because in 1954, 67 executives from Time-Life came to Pine Lakes to plan a sports weekly; Sports Illustrated.Now completely restored as of March 2009, the golf course has gone through a 20-month fixing up that cost millions of dollars to do. Nothing is too small, or too expensive, for this legendary golf course, the one that started it all in the Mecca of Golf; Myrtle Beach.

"Where the Grand Strand comes for Golf Information"