Started out by playing golf, then started designing his own courses 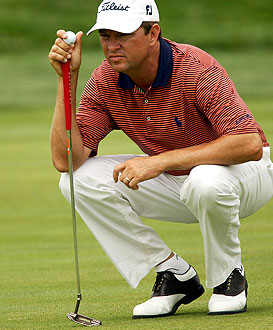 After attending the University of North Carolina, he would go on to be a three time all-American and all-Atlantic Coast Conference golfer, while winning six titles during his college career including the Atlantic Coast Conference Championship in 1984. Roughly ten years after that win, Love founded Love Golf Design with his younger brother Mark Love. With his firm, Love has designed courses across the country with the first being completed in 1997 in South Carolina.

That year would be a big year for Love as it was the same year he won the PGA Championship and published his autobiography, which received the 1997 United States Golf Association’s International Book Award.

Davis Love III has left his mark on Myrtle Beach as well with the masterfully designed course at Barefoot Resort.

The Love Course is a wonderful course that embraces the character of the low country, even incorporating the ruins of a plantation house on holes three to seven. The course has also proven to be very popular among seasoned golfers in Myrtle Beach, with many golfers coming from around the country to play the course Golf Digest called the best course in Myrtle Beach.

Davis Love III is a champion golfer who was raised on golf from a young age. With his golfing professional father, who died in a plane crash in the 1980s, teaching him the ropes of golf, he was able to fashion a career for himself out of his father’s shadow. While he may not play as much as he used to, he still leaves his mark on golf with his golf courses that are being called some of the best designed courses of the past 25 years. When you play a Love course, you feel the love the designer has for the game of golf with every hole you shoot.

After getting a degree in Landscape Architecture in 1972, he would go on to join his fathers firm in 1974 and helped to design 17 courses with his father. In 1984, he went on to form his own company called Dan Maples Design Inc. and has since become incredibly successful designing some of the best golf courses in the entire country. Maple has always had the philosophy of ‘From the beginning, one of our goals has been to build courses that players would remember.’ This is true because when you play a Maples-designed course, you are playing a course you will never forget.

Myrtle Beach has several courses designed by Dan Maples and if you golf in Myrtle Beach, you cannot leave until you try one of these legendary courses for yourself.

Pearl East was built on a 900-acre marsh preserve and immediately earned critical praise when it was built, even getting nominated for Best New Public Course by Golf Digest. After being renovated in 1999, it has gone on to be a highlight of the Grand Strand golf experience.

Sandpiper Bay is one of the finest examples of a Grand Strand golf course and is considered one of the best places to golf in Myrtle Beach thanks to its course and its wonderful and caring atmosphere.

The Dan Maples Course at Sea Trail has been described by critics as the masterpiece of Dan Maples and his ultimate achievement. With ancient oaks, Carolina pines and Tifdwarf greens, this par-72 course is also home to nesting pairs of Osprey!

Willbrook is a course that blends natural beauty with challenging golf. In the book ‘The 100 Greatest Holes Along The Grand Strand’, the Willbrook Plantation Golf Club had two holes named to the list. The club also includes a wonderful clubhouse and a golf academy to help people learn the game of golf on one of the greatest courses Myrtle Beach has to offer.

Oyster Bay uses the historical philosophies of golf course architecture and the strategic needs of golfers and creates a golf course that was picked as the Resort Course of the Year in 1983, and was picked as one of the top 50 public courses by Golf Digest.